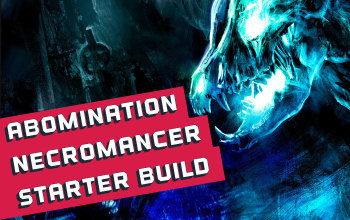 Complete Build Guide for an Abomination Necromancer, a starter build that uses just one Minion

An Abomination, which can be assembled out of your other Minions, can be a very effective tool to deal with all kinds of threats. In this build, it's the only Minion able to deal any damage. The Abomination will stay permanently, as the Age of Undeath passive disables its Health Decay. To make it work, its diet must consist exclusively of Skeletons - the regular ones, and Mages - so that two of your Skills are dedicated solely to feeding the Abomination, increasing its Health and Damage. The only active Skill that must be used every now and then is a Dread Shade with Egoism and Lone Watcher passives - it is specialized in buffing a single Minion with greatly increased effect. The emergency Skill that can be deployed in a dire need of more DPS is Infernal Shade - it further buffs your Minion, but in turn, it will drain its Health permanently - which can cause it to die eventually if you are not geared properly. If you've used it at least once, your Abomination will have to be eventually re-summoned, but it should stay up long enough to take down basically any Boss in the game on its own.

The main idea behind this build is to Summon as many Skeletons as possible, of all kinds available, to maximize the Health and DPS of your Abomination. For that, you need to unlock Rogues, Pyromancers, and Cryomancers. You should avoid picking up Death Knights, as they make you unable to summon any other type of Skeletal Mages.

For the defenses, this build utilizes: