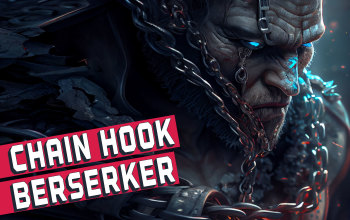 Chain Hook is not a very good Attack, it requires you to aim precisely at the enemy (no matter how big of an area of effect it has), and then, after a quick dash, it deals damage. The damage has a shape of a cone which is actually pretty large, it can reach the edge of your screen with no additional AoE enhancements. It doubles as a movement attack, as long as there is an enemy you can aim for. The other distinctive quality of Chain Hook is its Rage generation, one per Hit. The effectiveness of the Weapon's Damage and Attack Speed Multiplier are not exceptionally good, at around the same level as Infernal Blow (minus added Fire Damage). It's a good skill to quickly generate Rage and move around while Attacking, but overall it's too clunky and weak to be considered a powerful end-game build, more proof of a concept that all attacks work well on a Berserker.

As the Attack Generates Rage, We've decided to pick Crave the Slaughter and Rite of Ruin to get more Rage faster, and with triple effect. Rage increases Attack Speed, Attack Damage, and Movement Speed. With 80 Rage, which is easy to get, it will get you 240% increased Damage, 120% increased Attack Speed, and 48% increased Movement Speed. You can then spend this Rage on Berserk for a brief and extremely ponent buff to all these qualities - it will shred most bosses in seconds if you've entered their area with a lot of Rage already, and if not, it will be quickly generated in no time. For even more Damage, we've selected Flawless Savagery and Blitz for more added Damage, Attack Speed, and Critical Strike modifiers. The Chain Hook will deal purely Physical Damage with a high Crit Chance and 100% Chance to Impale. For defenses, it uses basic Armour, Block Chance, and a lot of Life and Life Leech.

Use Chain Hook to dash to your target, try to be precise or it won't work at all. Pase Run is used for Phasing and more Damage. For even more Damage use Ancestral Protector and Warchief which will Maim on Hit. For more Attack Speed and Frenzy Charges use Blood Rage and occasionally Berserk Skill when fighting bigger opponents. As for a Guard Spell, pick Molten Shell and link it with Cast when Damage Taken. For a Curse, we recommend Assassin's Mark, and if you can apply a second one (via Whispers of Doom), get a ring with Vulnerability on Hit. The best Auras are Pride, Precision, and Determination. War Banner or Blood and Sand can be added if you have some space left.

A compelling leveling guide for this build can be found here: Marauder Leveling Guide, 2-handed weapon version. It's a guide for 2-hand weapons, which are in most cases better for leveling, but with little to no adjustments, it can be used with on-hand weapons.

57 Points Passive Tree
More Maximum Life, some Damage, Reservation Efficiency, Life and Mana Leech, Onslaught on Kill, and Phasing. You're free to pick some nearby nodes for more Physical Damage or Impale if you don't have a good weapon.

The build can run only on Rare Items, these perform exceptionally well and oftentimes are the best-in-slot if you want to min-max DPS. In terms of DPS, you prioritize your Weapon - One-Handed Mace, Sceptre, Sword, or Axe. We've selected Axe due to the multiple great Axe cluster and masteries near Marauder's starting location. Axes or good Paradoxica Swords have usually the highest DPS. Besides Physical Damage, seek Critical Strike, Accuracy, and Attack Speed mods. For defenses, Maximum Life and Armour are the most fundamental pieces, later you can invest more in Block Chance, Spell Suppression, Life regeneration, and Chaos Resistance. Assassin's Mark requires a lot of Intelligence, Blood Rage a lot of Dexterity - you will have to get it from your gear. Mana Reservation Efficiency should not be an issue. Remember to get Life and Mana Leech to sustain the self-inflicted damage from Blood Rage. It might be hard to achieve a 100% Critical Strike Chance. 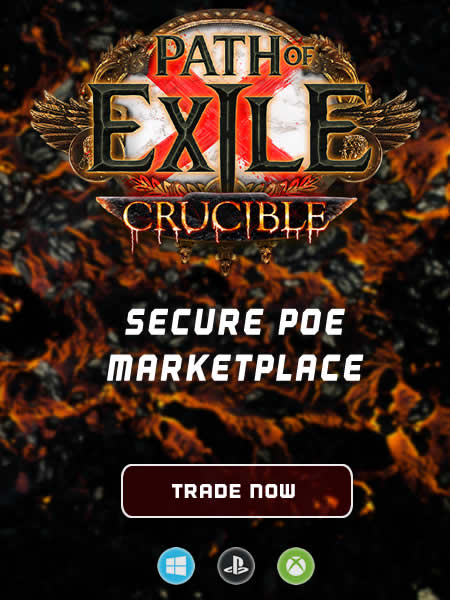