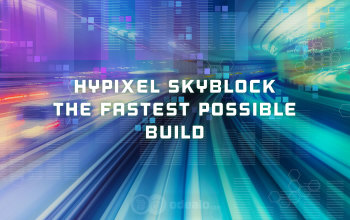 Ever since that one youtube video has gone viral, many Hypixel SkyBlock Players were determined to replicate it and reach the game's Speed Cap. With each subsequent update, doing it became easier and easier, but the existence of items such as Young Dragon Armor and the Legendary Black Cat Pat meant that the real Speed Cap was not 400, it was 600.

While the first number is very easy to achieve (we'll show you just how easy in this Guide), the second one is out of reach of most Players for a simple reason - it requires a ton of money that has to be spent in a very sub-optimal way. To show you how to do it, we have decided to pick up the gauntlet, reach very deep into our pockets and make our character achieve the hard Speed Cap. Not only that, but we have also tried to exceed it... did we succeed? Well, you will find out from this article.

Reaching the soft speed cap of 400 is very easy nowadays and there are hundreds of item and potion combinations that allow you to do it. This means that there is not much point in listing every piece of gear and every consumable that will allow you to reach it. With this in mind, we have decided to give ourselves a bit of a challenge:

*Every Character already has 100% base Speed, so we basically have to reach 500 in total, so 100 over the Cap. It's redundant, but we want to prove a point here.

After a bit of research and some testing, we came up with a Hypixel SkyBlock Speed Build that consists of just three Items, costs less than 350k Coins, and reaches 400 additional Speed with some reserve, however, it also requires quite a lot of grinding to unlock conditional speed boosts of the used items (unless you already happen to have them unlocked, of course).

With the Yeti Rod and the Obsidian Chestplate with 35 stacks of Obsidian, we are up to 212 additional Speed and 190k Coins spent and we're still 188 Speed short of our goal. This means that there is only one item we can use if we are to keep the costs down to the minimum:

600 Speed is where things get a bit more tricky and much, much more pricy - reaching the true Speed Cap on a budget is just not possible because we are flat-out required to equip ourselves with some specific (and extremely expensive in some cases) items. This requirement comes from the fact that we need to increase our maximum speed limit by 200. We can do that by simply equipping:

To make things just a little bit more tricky, we have decided to drop the Yeti Rod as well and replace it with the classic choice - a Hunter Knife. Here is the list of our core items and a little bit more information about them:

The answer is: Well, it depends. You can't really do that on foot, but you can do it while mounted*! Here is how:

*Which may or may not be cheating, depending on what rules you decide to follow on this one. If you want to become The Fastest Man in Minecraft and beat the unbeatable 600 Speed Cap, however, this is the only choice that does not involve cheesing and/or glitches, as far as we know.

500% Speed is a lot, but it is still much less than the Speed Cap... If only there were something that would increase our Mounted Speed even further...

Pictures used in this article are the intellectual property of Hypixel.